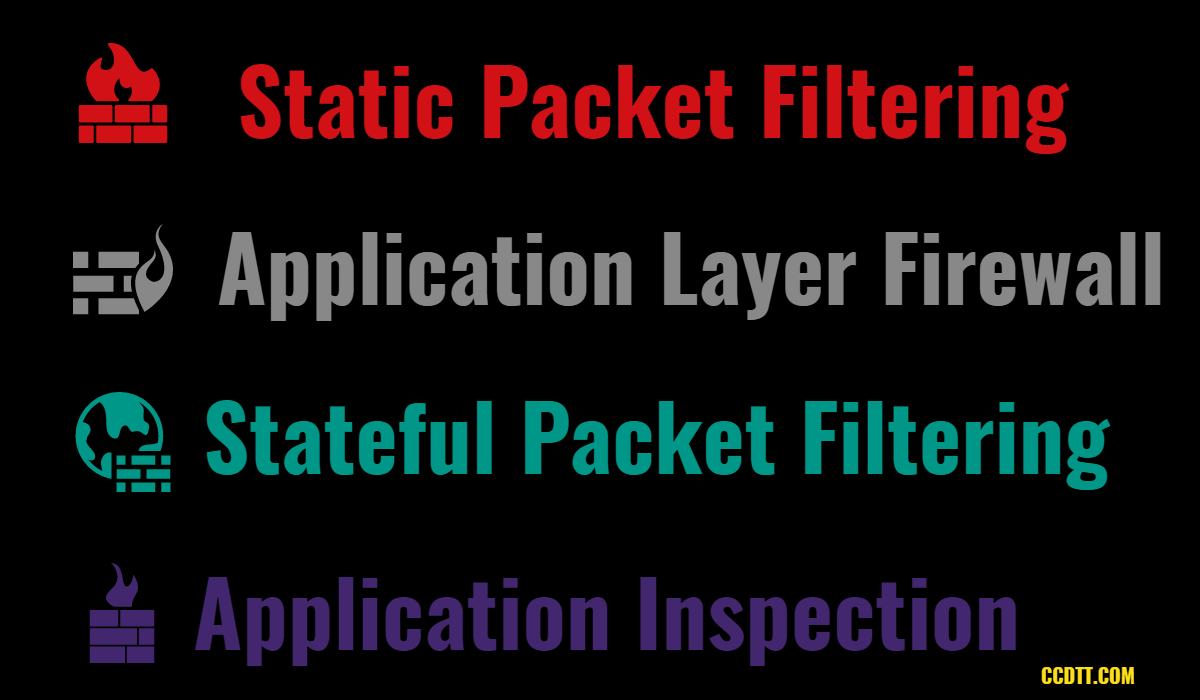 Because packet filtering uses a simple rule set (a packet that comes in or out of an interface where there is an ACL applied for filtering), there is a check against the packet with the entries in the ACL from top to bottom. As soon as a match occurs, the ACL stops processing the rest of the list and implements the action against the packet, which is either a permit or deny. An extended ACL on a Cisco router can use many matching criteria against the Layer 3 and Layer 4 headers, including the following:

Application layer firewalls, which are also sometimes called proxy firewalls or application gateways. Also can operate at Layer 3 and higher in the OSI reference model. Most of these proxy servers include specialized application software that takes requests from a client. This puts that client on hold for a moment, and then turns around and makes the requests as if it is its own request out to the final destination.

A proxy firewall acts as an intermediary between the original client and the server. No direct communication occurs between the client and the destination server. Because the application layer gateway can operate all the way up to Layer 7, it has the potential to be very granular
and analytical about every packet that the client and server exchange and can enforce rules based on anything the firewall sees.

Stateful packet filtering is one of the most important firewall technologies in use today. It is called stateful because it remembers the state of sessions that are going through the firewall. Here is a great example. Suppose that you and I go to an amusement park, and halfway through the day we realize that we forgot something in the car. So, on our way out to retrieve the item, we wonder (at the gate) whether we have to pay to get back in.

The nice person at the gate explains that she will stamp our hand with a code so that when we return we can show the code and they will let us back in for free. Let’s say, for our example, that they also write our names on a list of people who were already on the inside. They were going outside to the parking lot with the intention of returning. When we want to come back inside, the people at the gate check the list and see that we have already been on the inside and that we left temporarily. So, they allow us back in.

With a stateful packet-filtering device, for customers on the inside of the corporate network, as they are trying to reach resources on the outside public networks. Their packets go to the firewalls on the way out. The firewalls take a look at the source IP address, destination IP address, the ports in use. Also, looks at other layers for information and remember that information in what is known as a stateful database. It is called stateful because the firewall is remembering the state of the session (that it was on the way outside, including the ports and IP addresses involved).

By default, this same firewall does not allow any traffic from the outside and untrusted networks back into the private trusted inside network. The exception to this is for return traffic that exactly matches the expected return traffic based on the stateful database information on the firewall. In short, the reply traffic goes back to the users successfully, but attackers on
the outside trying to initiate sessions are denied by default.